Uncertainty about economic recovery remains a hot topic for many in the property market. For some, it is a time of growth, investment and acquisitions, for many it’s a period of redundancies, frozen bonuses and salary reductions.

This year has been like no other for the property sector. Whilst there is plenty of individual commentary in the industry press and wider news, it can be hard to arrive at a consensus for the UK property industry.

We wanted to create a detailed picture of the current opinions and outlook for the property sector up and down the country. Our survey of the residential development sector encompassed 450 respondents covering everything from housebuilders and bespoke developers, to developing housing associations, build to rent and modular providers.

Nearly half of the sector (47%) reported that they have not seen a significant effect from the pandemic. A sizable minority (13%) even said that the strong market post-lockdown had more than made up for any difficulties seen during the course of the pandemic.

And it is clear that demand post-lockdown has for most been strong, with 39% saying it had recovered to around the same level.

Dave Sheridan, executive chair of modular housebuilder Ilke, also has a perspective on the performance of the volume housebuilders through his role on groundworks firm M&J Construction. He said: “The top 10 housebuilders are just getting more and more confident around releasing new sites, and bringing forward new phases. “The government’s ‘build, build, build’ message has made clear it’ll do what it takes [to support the industry], and now we’ve had the announcement of a vaccine – it has all been stimulating the market.”

Dena Burgher, a former Vistry executive who now works as an interim independent director via her consultancy Revision Property Solutions, says: “The main issue is in building sufficiently quickly to capitalise on the demand in the market now – it’s a race against time.”

Click or swipe through the images below to see the results of the survey. 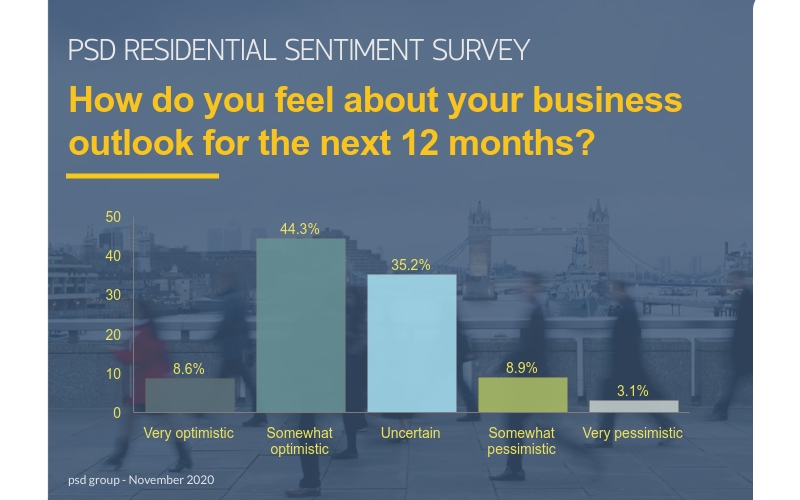 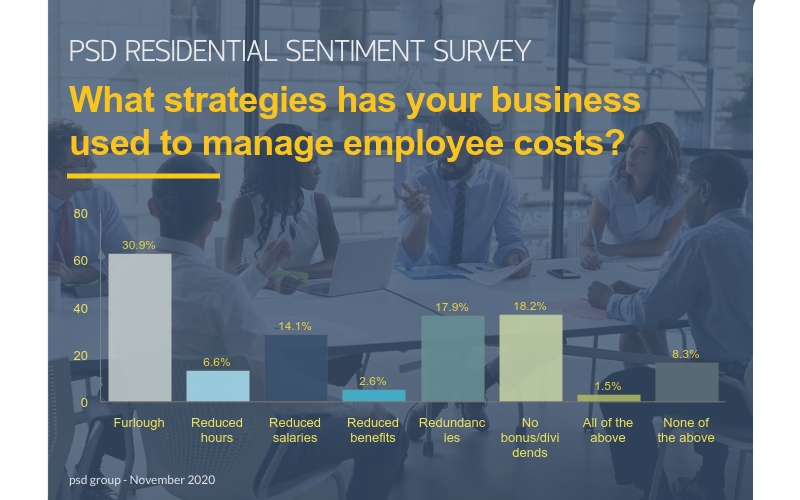 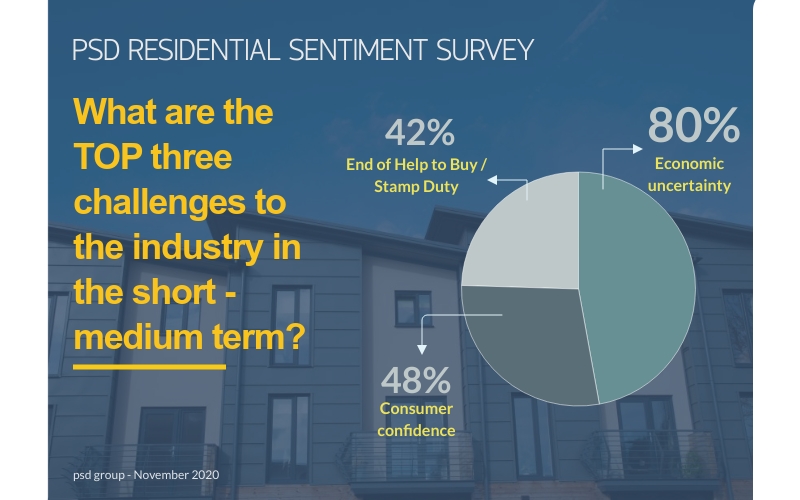 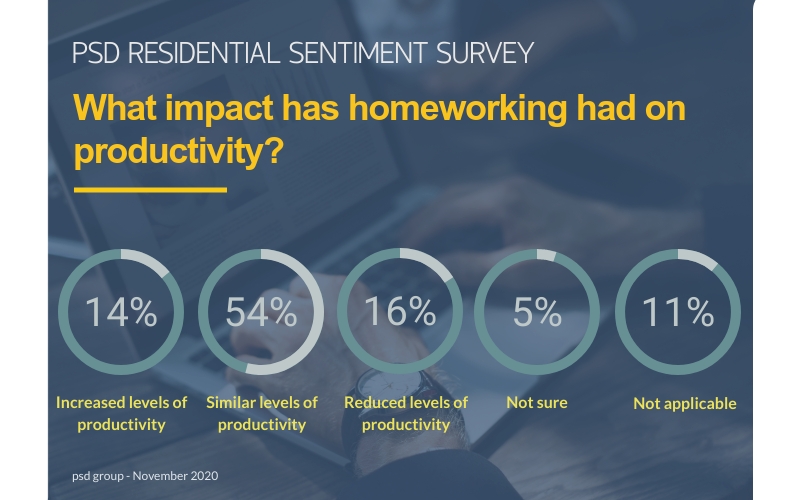 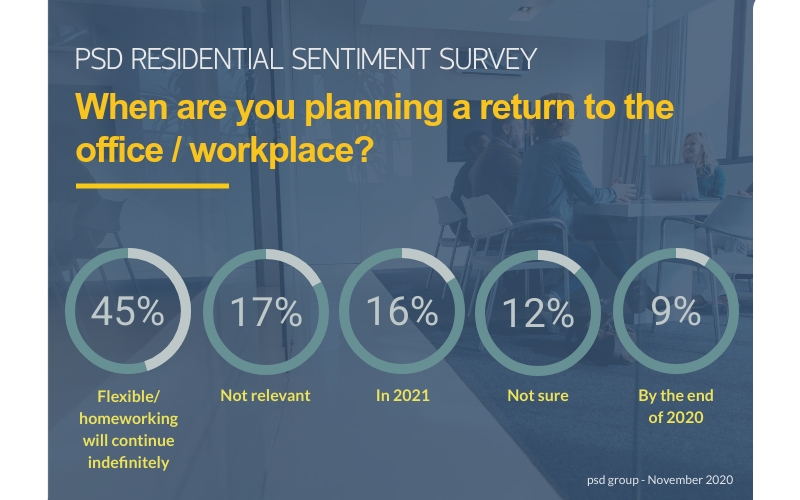 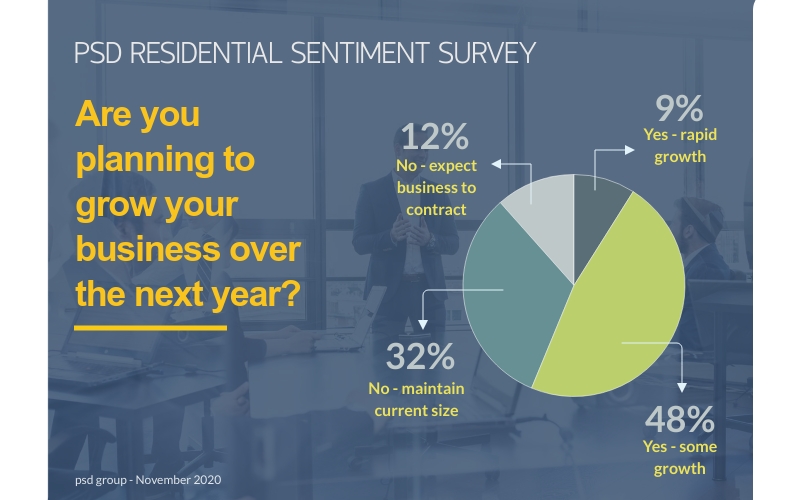 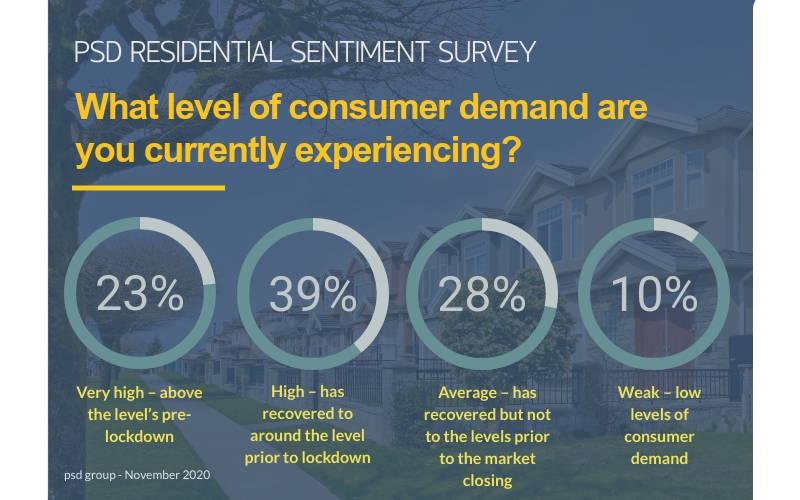 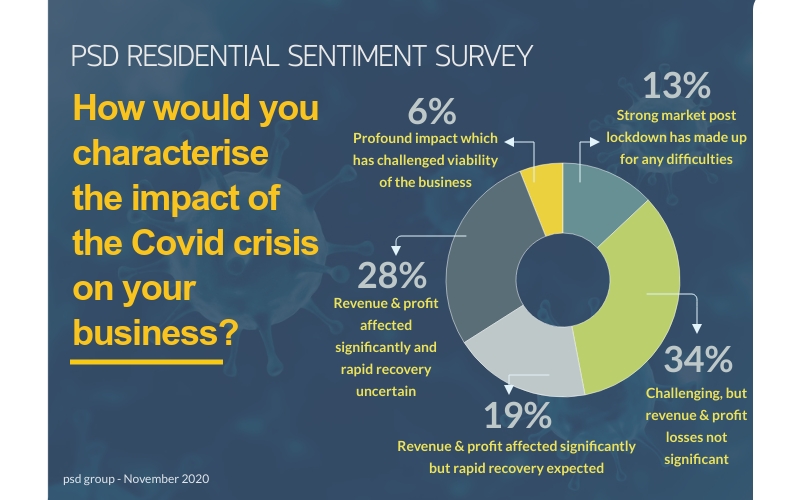 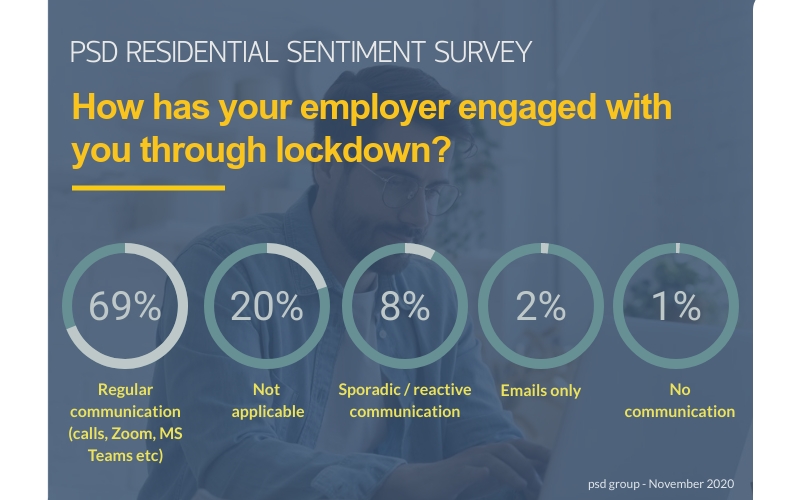 However, this confidence is only half the story. In the lockdown last spring, most housebuilders furloughed staff, cut salaries, slashed dividends and stopped buying land, in fear of what was coming down the track. Even as the market has strengthened, many have started to prepare for what is seen as an inevitable weakening of the market next year.

Overall, the survey found that just over a third of businesses (36%) have made redundancies since the start of the pandemic.

Overall, the survey found that just over a third of businesses (36%) have made redundancies since the start of the pandemic. A similar number, it found, had cut bonuses entirely and stopped dividend payments, while others have cut working hours and more than a quarter reduced salaries.

Unsurprisingly, the sentiment survey finds economic uncertainty top of the list of concerns of residential developers a long way, with four out of five rating it as one of their biggest challenges. The two other big issues are consumer confidence and the ending of the Help to Buy scheme and stamp duty holiday.

Overall, the survey found 47% of developers were uncertain, pessimistic or very pessimistic about the next 12 months. Revision’s Burgher says: “You’ve potentially got a perfect storm of issues, and because of that people are being much more conservative than current sales would suggest. I think they are modelling worst-case scenarios, and some are looking at bringing in forecasts around 10% down next year. There are just so many unknowns. But my sense is there could be redundancies and restructurings in the spring.”

Despite this uncertainty, the survey found that 53% of respondents were either optimistic or somewhat optimistic about the year ahead.

Shaun Pridmore, owner and director at Essex-based SME housebuilder Marden Homes says the pandemic has been “not as bad as it could have been”, as the firm had worked hard to catch up since reopening after a short site closure. Since then, he says, the market has gone “quite hot” and the firm could have sold more if it had more stock available. “It’s very hard to guess, but I’m an optimist by nature. We’re looking to expand if anything – if the larger builders are holding back on land acquisitions, it might present us with some opportunities.”

“It’s very hard to guess, but I’m an optimist by nature. We’re looking to expand if anything – if the larger builders are holding back on land acquisitions, it might present us with some opportunities.”

Geraint Oakley, executive director of growth and development at 45,000-home housing association Platform, says the organisation is targeting the construction of 2,000 homes a year within five years, compared with a covid-affected likely outturn this year of 1,200 homes.

This expansion means he is actively recruiting a new team, with plans to bring in a land director, sales director and business development director in the coming months. Platform splits its new-build housing into thirds, between social rent, affordable rent and shared ownership homes – all of which Oakley says there is strong demand for.

As in other sectors, the coronavirus crisis has forced many housebuilders and property developers into different ways of working – from social distancing on site, to remote working for formerly office-based staff.

The built environment has been evolving slowly over the years in many of its working practices, and it looks like the covid crisis has sped up this evolution exponentially.

The sentiment survey found that over 80% of respondents had encouraged working from home for some staff and that many of these changes are likely to be permanent. Nearly half (45%) of respondents said that flexible or homeworking will now continue indefinitely, with just 10% expecting to return staff to the office this year.

Nearly half (45%) of respondents said that flexible or homeworking will now continue indefinitely, with just 10% expecting to return staff to the office this year.

For two-thirds of businesses, this move to more flexible working patterns has not been found to reduce productivity. In fact, 14% said productivity had increased in the period.

Gerraint Oakley, executive director at Platform Housing Group, said that, while it will be a mixed picture as some staff were “desperate to get back to the office”, he did not foresee the business going back to “mass office” attendance. “We will want to retain that flexibility,” he said.

How optimistic do you feel about the market over the next 12 months?

For businesses that have encouraged home working, what impact has this had on productivity?

Are you planning to grow your business over the year ahead?

How would you characterise the impact of the covid crisis on your business?

We work with clients to identify and appoint candidates for board-level, mid- to senior-executive, and management roles across the full range of property & construction activity.

Find out more about recruitment in Property & Construction

Elliot is a Director in psd‘s Property & Construction practice, recruiting into the Residential Development, Affordable Housing and PRS sectors.